We started our Japan topic by first looking at our home town. We looked at the geographical features of a town. To do this we went on a walk around the school grounds.

Pictures of the features

We then explored the English countryside, looking for geographical features using Google Earth. Using new techniques with chalk pastels we recreated an image of the countryside.

Our chalk pastel drawings of the Japanese countryside

We looked at traditional Japanese food. We discovered that Japanese traditional cuisine is dependent upon the seasons and the geographical locations of the population. We looked at what sushi is made from and how it is made. We explored a variety of Japanese foods that can be found in the supermarket. We talked about the types of food, what they looked like and what they may taste like.

We then talked about the use of chop sticks in the Japanese culture. We looked at how they were used were given a lesson in how to use them. We then practiced this using them to pick up mini marshmallows and transferring them to a different plate.

We looked at an artist called Paul Klee. The Swiss- German painter was influenced by cubism, expressionism and surrealism. The painting that we chose to focus on was “Castle and Sun” as it reminded the children of a city skyline. Using his picture as inspiration the children used 2d shapes to recreate a part of the Tokyo skyline.

The children worked in partners to create their pictures. They discussed the layout of the shape deciding which shapes would work best in their picture. The using oil pastels they each coloured in a side of their picture using the techniques previously practiced.

The children have looked at traditional Japanese poetry called Haikus. They learnt that they traditionally focused on the seasons and had a certain structure.

We practiced writing our own creating a class book:

We looked at the work of Meiji Hashimoto called Sakura. This piece of art can still be seen today in the State Hall of the Tokyo Imperial Palace. This painting took inspectors from a famous thousand-year-old weeping cherry tree and was part of two that were commissioned to be placed on a set of sliding doors leading to the State Hall.

We decided to take our knowledge of printing which we had learnt earlier in the year and make our own collaborative piece of art work inspired by the work of Meiji Hashimoto. The children first designed their cherry blossom stamp. They then created their own stamp out of polystyrene. They scored the shape of their cherry blossom design into a piece of polystyrene and then cut it out to make a stamp. They then scored the detail into the insides of the petals.

Once their stamps were finished they worked together to complete the collaborative piece. They painted the stamp and added the blossoms to the tree.

While some children were creating their cherry blossom tree others were trying their hand at other Japanese activities. Such as origami, making decorative fans, drawing manga characters and writing Japanese words (Kanji).

The children discovered that Japanese storytellers travelled by bicycle from town to town, village to village. They would secure their butai – a wooden structure, half picture frame, half theatre stage to the back of their bicycle. The kamishibai man would start telling a story – pulling each of his numbered storyboards from the side, and sliding it at the back of the stack, one after the other.

The children used this form of story telling to create their own story plate for the traditional Japanese folk tale of Momotarō  "Peach Boy". They then used these story plates to retell the story of the hero. (Momotaro Peach Boy - Read Aloud Stories for Children - YouTube)

Throughout our Japan topic the children have explored the different festivals and celebrations that take place in Japan through the year. The children focused on the celebration of "Childrens Day". It is a day that is celebrated in Japan on the 5th May and it is a day set aside to respect children's personalities and to celebrate their happiness. It has been a day of celebration in Japan since ancient times.

On this day, families raise the koinobori, which are carp-shaped windsock (carp because of the Chinese legend that a carp that swims upstream becomes a dragon and flies to Heaven, and the way the windsock blow in the wind looks like they are swimming). The children created their own koinobori and decorated the outside area. 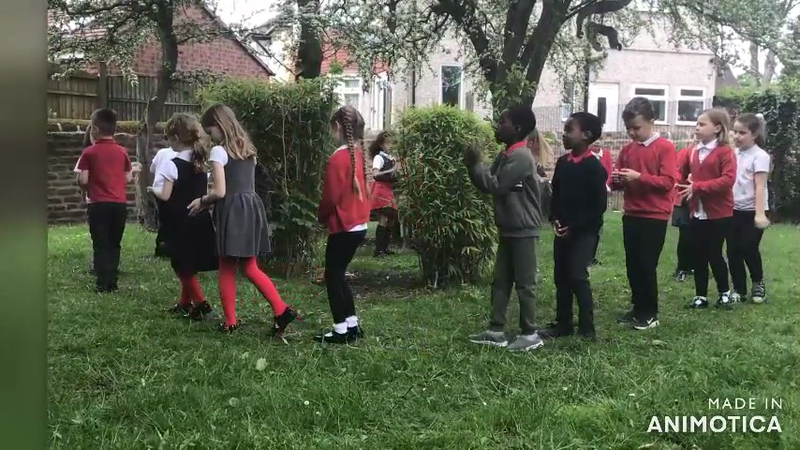 The children also played a traditional game called Otedama. The children had five bean bags on their table. They had to pick up one and toss it into the air. With the same hand they had to pick up another bean bag before the other fell. They would repeat this making it harder each time by picking up two and throwing and then three until they reach all five.

After performing the dance and playing the game the children went inside and tried a variety of Japanese foods. Traditionally on Children's day Kashiwa mochi would be served. These are sticky rice cakes with different fillings. The children tried a variation of the traditional red bean, Matcha and milk flavoured mochi. They then tried Nori "seaweed", traditional rice crackers, coconut rice crackers, Jelly straws and Mikado. The children were excited to try all of them and although they didn't like them all they all had a great time! Some of them even found new foods that they liked.

What a fantastic children's festival!