Highfield Hall was originally a stone built Georgian mansion. It was first mentioned in Lyson’s History of Derbyshire {1817} "Highfield, in Newbold came into the Eyre family by marriage with the heiress of Milnes of that place. It is now the property and residence of Vincent Henry Eyre, Esq. He is the proprietor also of a Roman Catholic chapel at Newbold, which has been the burial place of the family."
A further reference is made in Bagshaw’s Gazetteer of Derbyshire {1846). Highfield is described as "a neat mansion embowered with trees, one mile N.W. of Chesterfield, the seat and property of Bernard Maynard Lucas."

From an auction in 1914 we know that a field of about 3 ¾ acres attached to the Hall was known as the Green House Field.

The Hall and estate was purchased from the trustees of the late Mrs. Eliza Lucas in April 1920. The tenant, Mr Lyttleton Gill, left in September 1920 and the hall was then turned into flats. Fifteen families were housed here in 1927. The Hall is described at that time as containing a quite large entrance hall, dining room, breakfast room, library, billiard room, servants hall, kitchen, housekeepers room, larders, etc, and twelve bed and dressing rooms. It was said to be in good repair and very warm. In the stable yard were coaches, cow houses, and piggeries.

Most of the estate was developed as a residential area, and in 1927 one hundred and thirty-two council houses and twenty-eight private houses were built. By December of the following year a total of four hundred and eighty six houses had been built.
Towards the end of 1928, negotiations were opened between the Education Authority and the Hall's residents with a view of the house being converted into a school. As result of this the house was sold to the Education Committee at a cost of £2,700. Careful investigations were made as to the character of the soil, subsidence, the water supply and the sewer pipes. Nothing was found that would prevent the scheme. In March 1929 the approval of the Ministry of Health was given for the needed building work. In May the money was given for the conversion of the Hall into an infant school.

The original building was altered to provide room for two hundred children. The ground floor was adapted to provide two big classrooms, two entrance halls, two cloak rooms and a caretaker’s store. A balcony with stone arches was added. The upper floor contained two more classrooms, a Head Teacher’s room and a staff room. Electricity and central heating were installed and the old basement was converted into a boiler room and fuel store. A toilet block was built and a new drainage system was devised. The cost of the work was £3,800.

At a meeting of the Council on September the 9th 1929 £491 14s was set apart for the furnishings of Highfield Hall. The details are given below:

The school was opened in January 1930 with 155 infants. The number of children quickly increased and the building was filled by July.

The official opening of the school took place on Wednesday July the 23rd 1930 when Morgan Jones esq. M.P., Parliamentary Secretary to the Board of Education, visited Chesterfield to open Highfield Hall, Peter Webster Boys Secondary Modern School and William Rhodes Infant and Junior school. In a speech at the opening of the school given by the Chairman of the Education Committee, Alderman H. Cropper J.P., it was said that the rebuilding of Highfield Hall as a school had saved the rate payers £10,000, as building a new school would have cost £18,000.

Printed in the program of the official opening was the following poem that one of the pupils, Kathleen Naylor aged eight, sang with the help of her mother: -

Our school is very beautiful-
It has a garden round
In which are beech trees tall and strong,
And pretty flowers are found.

This school was once a hall, you know,
Highfield was its name;
But now it’s a school, you find
It isn’t quite the same.

Of classrooms there are eight in all,
Each of a different hue-
And when you come to look at them
You’ll like them as we do.

Our playground is a joy to us,
It is both large and square;
And if just over the wall you look
You’ll find flowers growing there.

In summer we can take our chairs
Into the garden green,
And listen to the birdies talk-
I know, for I have been.

Yes, we agree that we are proud
To come to Highfield hall,
And every one of us will be
Delighted when you call.

In a report on Education in Chesterfield written at the time it said of the school. "The four acres of ground contain some of the most beautiful trees in the district, the great age of many of trees add to the peaceful surroundings. There is no main road anywhere near the school.

A great ambition of the younger children is to be promoted upstairs and to take their place with the grown up eight year olds. Many of the children come from very poor homes some children were actually born in the school when it was divided into tenements.  For them a lesson in the in the open air- small chairs drawn up in a square on the grass and a piano on the balcony playing a happy country dance- is an occasion for true and lasting happiness. And if a visitor calls during rest time, he or she will see on the balcony a line of little beds, the happy occupants of which gallantly attempt to shut out the sight of grass and trees."

"The decoration of the four original classrooms was an attempt to illustrate the four flowers- rose, daffodil, pansy, and chrysanthemum. The babies’ room downstairs mixes the rose colour scheme with a skilful use of green. The walls are rose coloured relieved by dark green blackboards and green wooden strips to which are pinned illustrations from the books and magazines and some of the children and teachers’ own work. The little tin boxes for chalks and toys, which were originally homely tobacco tins, have been painted pink by the children themselves. The blankets for the rest periods are the same colour, and even the backgrounds of such things as timetables fit in with the scheme. The lamp fittings are green, and combined with attractive white lampshades make lighting of the room most pleasing. It is hoped that the children will be found with rosy cheeks and viewing the world with rose coloured spectacles in order to make the picture complete. Presumably the green comes of envy on the part of the spectators of this happy scene!

The daffodil room is perhaps the most successful from the point of view of the colour. Three shades of yellow have been used: the ceiling is the palest yellow, the walls are darker, and the wooden strips are a bright deep colour which brings out a sunny effect in the room, which is made more apparent by green framed blackboards, and a green door. The lamp hangings are gold, and the childrens’ books have yellow labels.

Upstairs there is the pansy room; it has mauve walls and a cream ceiling. Green wall boards, green lamp hangings and black wooden picture rails complete the colour scheme.

The fourth room is decorated in the autumn colours of golden chrysanthemums with light brown ceiling and deep brown picture rails."

All children had a record book where examples of good work were kept and where assessments of the children were made under the headings of:
health, attendance, conduct, dependability, industry, cheerfulness, promptness, initiative, rhythmic sense, musical ability, quality of work, language,  knowledge (three R's work) skills (in handwork) and general intelligence.

Two years after the opening of the school, an application was sent to the Board of Education for permission to extend the school by building more classrooms. The work involved   destroying some old houses building in their place two classrooms on the ground floor and two more above. The contractor was a Mr. G. Beresford, of Barlow, the estimated price was £1,710. The work was carried out briskly as it was hoped to close the two condemned schools in Soresby Street and Vicar Lane at the end of July and arrange the move of the children to Highfield Hall for the new year.

The school was opened in 1930 with Miss Tempest as the Headteacher and a staff of 9 women teachers. 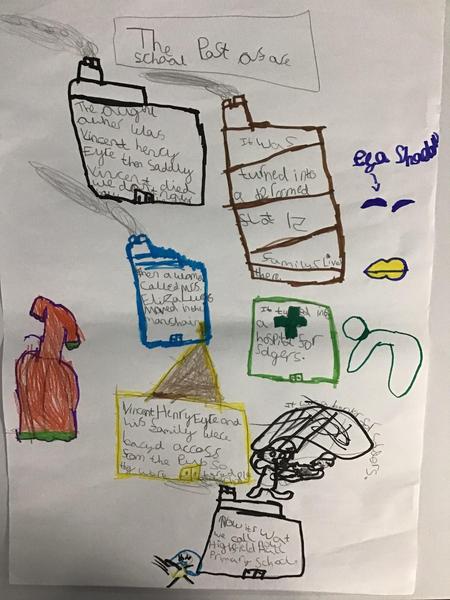 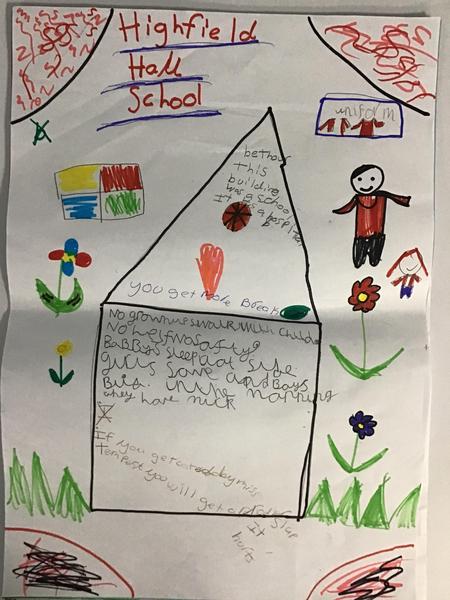 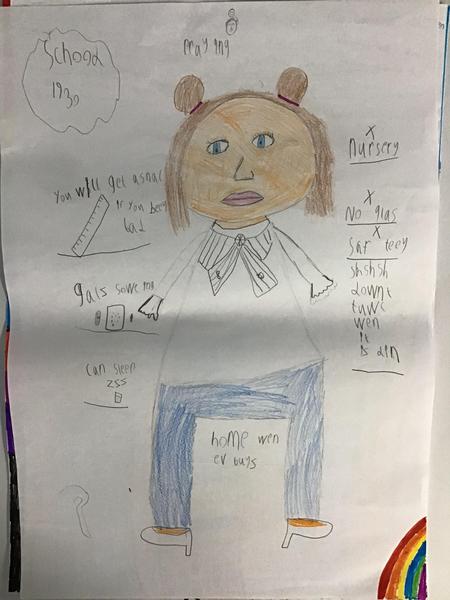 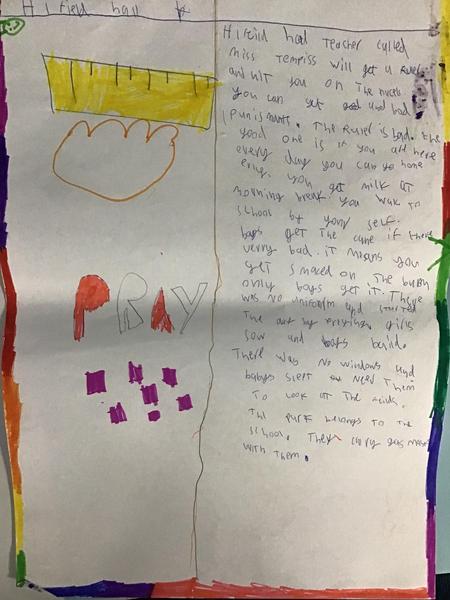