We did some Philosophy for Children (P4C) lessons about an Aesop’s fable. We listened to the story of The Ant and the Grasshopper and heard two alternate endings. In the story, the grasshopper doesn’t collect food for winter because he is too busy playing music. The ants work hard to collect stores of food so when winter comes they won’t starve. In ending one, the ants don’t share with the grasshopper because he hadn’t worked, so he leaves and gets sick. In the second, the ants send the grasshopper away but he says “I am bigger than you!”, and steals all their food so the ants get sick - he even eats some of the ants for extra protein!

The children discussed what they thought the moral of each version might be...and whether they agreed with the moral or not.

We then discussed the themes raised by the stories we’d heard. We did ‘Think, Pair, Share’ when considering some statements, stating if we felt the statement was true or false and why...

We can talk about our opinions... 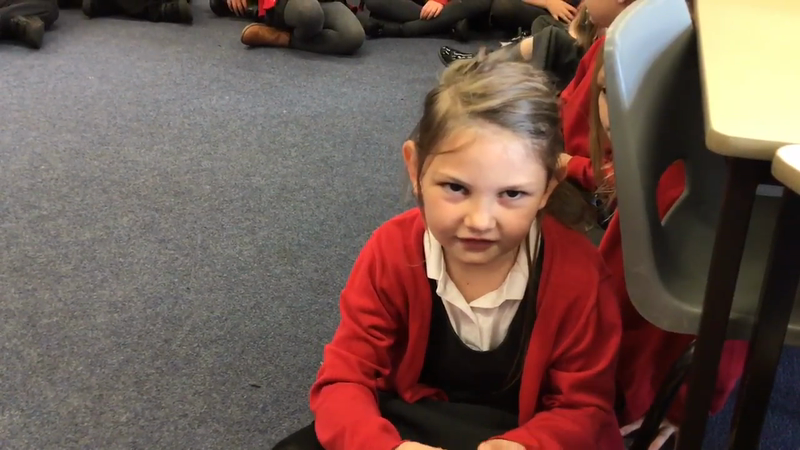 Finally, we played Philosopher’s Fruit Salad. We heard a statement or a question and if we answered yes or agreed, we had to switch places with another person. If we didn’t agree or answered no we stayed in our place. We used our stories as the basis for the questions and statements. We liked expressing our opinions without having to always speak in front of the class. We also liked that we all got a go instead of just one person with their hand up!

During Kindness and Anti-bullying week, we thought about how what we say to others can affect them. We said nice things to one apple - the kind of things we might like to hear our own friends say to us. We then said mean things to another apple - the kind of things we would not like our own friends to say to us. The apples both looked the same, we couldn’t see any difference, at least not on the outside. We talked as a class about where it hurts when someone says or does something unkind and all agreed it hurts inside. We cut open the apples fed to find there was a difference between them. The apple we had been mean to had bruises inside. These bruises won’t go away, in fact they might even get worse over time. Just like when someone says something mean to us at school, we might go home and think or worry about it. We might even be worrying about it a long time afterwards. We decided to write Sugar Cubes for each other - writing something sweet. We shared these at the end of the day.

On Election Day, we learnt about why we have elections, who can vote and how to vote. We talked about the different parties and that people will choose the one party they most agree with. We then decided to hold our own election. We split into parties. Each party had one thing we would ‘stand for’ (we were deciding what to do our last day of term) - we then wrote a manifesto telling the people why they should vote for our party. We gave speeches and then we all got one vote. We completed our vote privately by putting one X in a box and then posted it into the Ballot Box. When everyone had voted, the votes were counted. The Green Party won so we will be making decorations on the last day.
Top
Cookie information
Cookie Notice