Last term we had begun looking at how Londoners in 1666 would have found it hard to meet their needs during the time of the fire - and just after. Carrying on from this we have now started thinking about the basic needs of all living things including humans. We know that all living things need food, water, oxygen, shelter and climate. We thought about the differences in how our needs were met today compared with in the 17th century. We looked at how different animals needed different climates.

A farmer asked Dr Bywaters if we could help one of his hens. She had laid too many eggs and they wouldn’t all fit in her nest. She was worried about what would happen if they weren’t kept warm. Mrs Jones and Miss Holden said that Year 2 have been learning all about basic needs so we would be able to help! On Tuesday the eggs were delivered in a special warmer called an incubator.

On Tuesday evening one of the eggs was ‘pipped’ - this means the first hole is made by the chick. It’s the first sign that hatching will begin.
When we arrived at school on Wednesday morning, one chick had hatched. We called her Sandra. We waited until she had dried before moving her to the brooder (a cage with a heater, water and chick crumb). 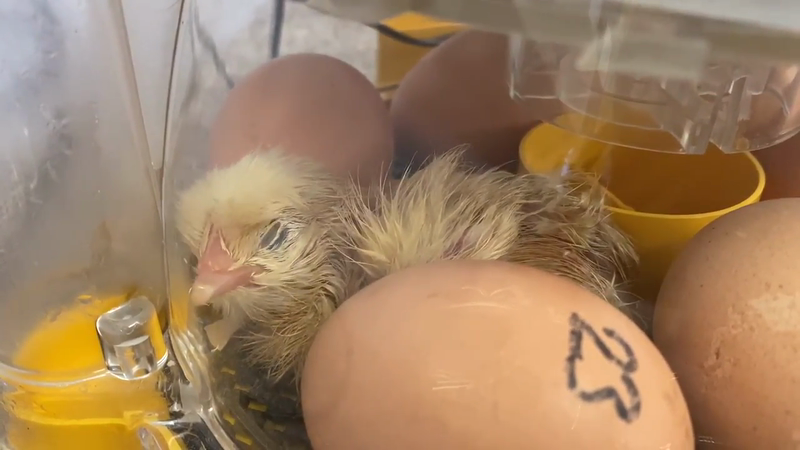 When Sandra had first hatched her feathers were still wet and she was exhausted!
Then we examined the inside of the egg that our first chick had hatched out off.
We have been carefully observing so we can see changes happening. We are observing like scientists and trying to use art skills to create form and texture. We reviewed our first draft and reflected on whether our drawings showed what the egg really looked like. We tried again, using different techniques with pencils and rubbers to create an accurate representation.
On Thursday afternoon Mel hatched! She was so tired it that it took her a long time to stand up. Now Sandra had a friend.
By the time we arrived at school on Friday morning, three more chicks had hatched. They were tired and needed to spend some time in the incubator to dry off and warm up.
Two other eggs had pipped - one hatched in the morning and one at around 5:30pm.
First the chick makes a hole.

The hole is being slowly pecked to make it bigger. 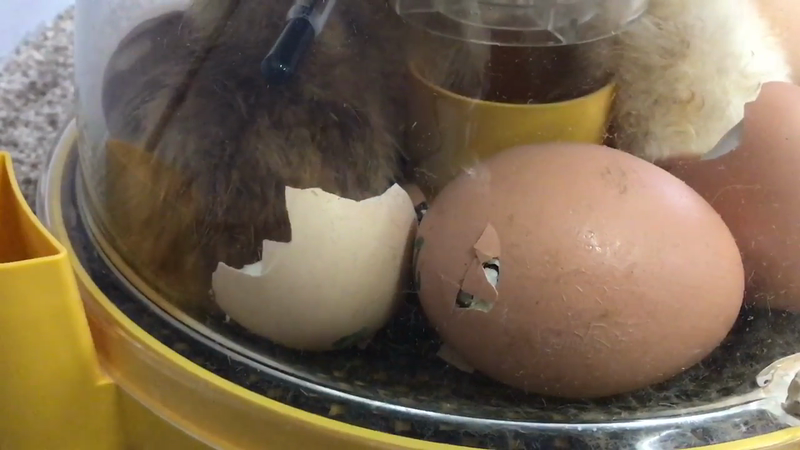 It’s hard work for the chick. 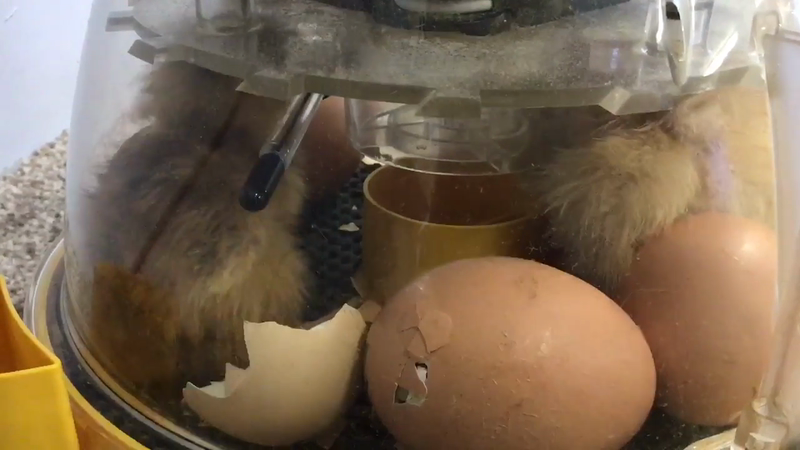 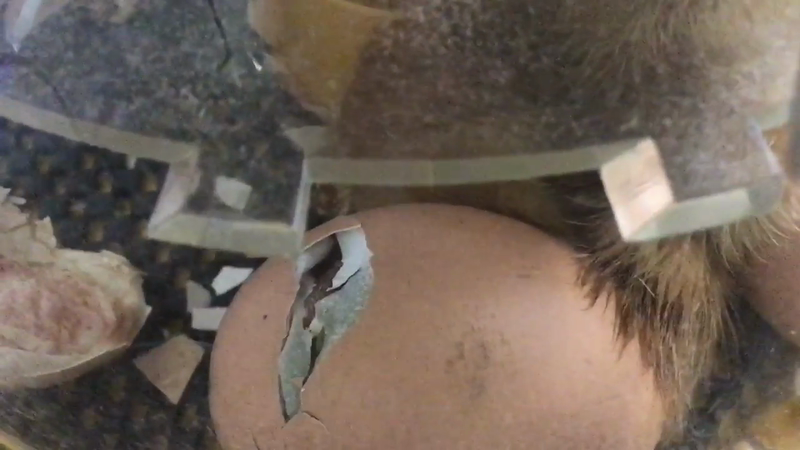 The chick tries to push itself out, resting between pushes. 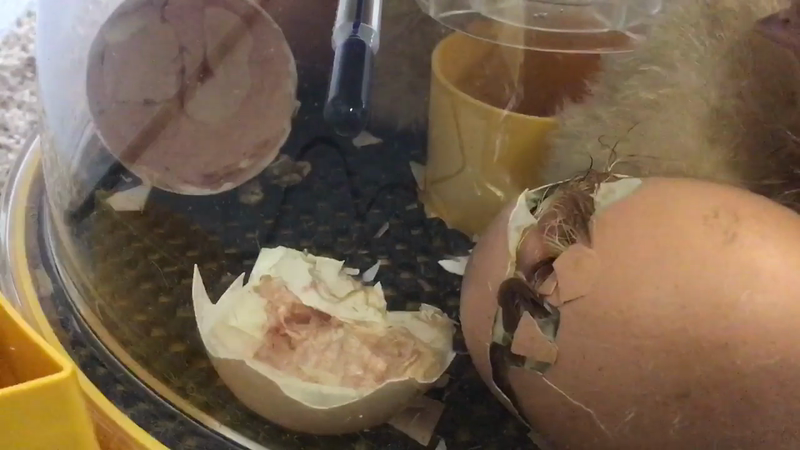 Eventually an exhausted chick is fully hatched! Welcome to the world, Flapjack! 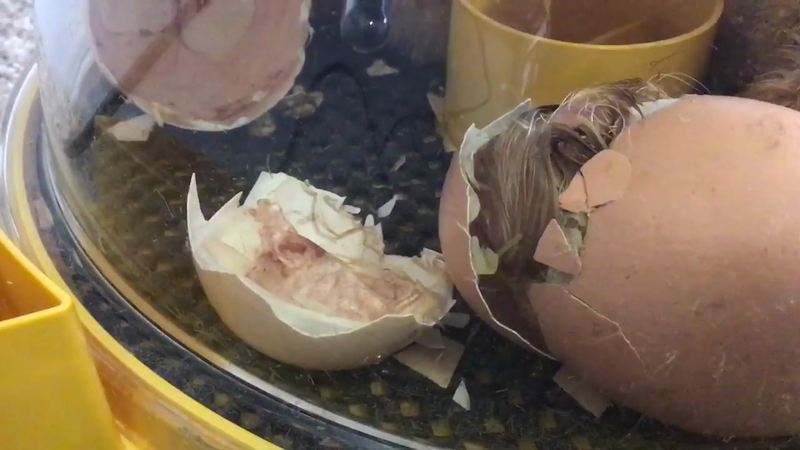 On Saturday morning, all our chicks are eating and drinking. They’re cheeping happily to one another! 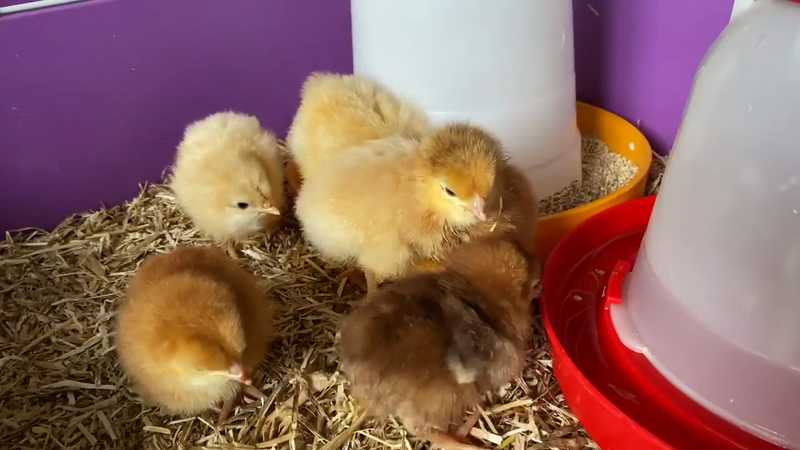 The chicks are growing really quickly, you can see a difference between their size on Saturday and Sunday. It must be all the food they’re eating!

Chicks eat a lot of food to help them grow quickly. 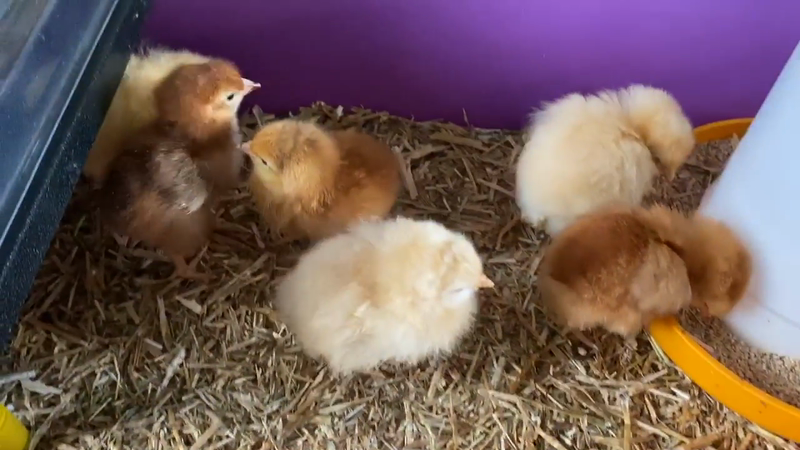 We were able to add two more chicks to our brooder on Monday morning. One that had hatched at 5:30pm on Friday and another that hatched over the weekend. We now have 8 chicks: Sandra, Mel, Natasha, Bill, Captain Feathersword, Flapjack, Eddie and Woody!
We spent some time observing our chicks to see if there had been any changes over recent days. We noticed that the chicks were beginning to moult - there were losing their downy feathers and growing adult feathers. We watched them play and held them so we could closely observe the changes.

Today the farmer collected the chicks to take them back to the farm. The chicks have grown a lot and their wings have far more feathers. They are starting to look more grown up! We are so happy that the chicks are going to be reunited with their family and will have lots of space to run and play in - we are going to miss them though.
We looked again at hand washing today. We were very lucky that we have been loaned a UV lamp so we can check just how good we are at washing our hands. We thought our hands would be perfectly clean because we have done lots of learning about this so far this term, so we used some gel to pretend to be germs.
The ‘germs’ showed up under the lamp. Then we went to wash our hands - trying to remember the correct steps to do it properly! We checked our hands afterwards. We were surprised that even being careful we had some germs left on our hands!
We made informative reports about the chicken’s life cycle. They are really brilliant!