During our first day of term, we were reading one of our favourite books as a class. The children expressed a keen interest in the toys in the book, so we decided to make this our first topic.

We we all brought a toy to school. We talked about our toys with our friends and used noun phrases to describe them. A noun phrase = adjective + noun ie red car,  blue train, pointy ears.

We used our noun phrases when we wrote descriptions of our toys. We found that they made our writing more interesting!

In art, we did observational drawings of our toys. We then watched a video about critique groups and how to give each other specific, constructive feedback. We then acted on this advice and produced a second draft. We are developing our resilience and our compassion, in addition to our art skills or form, shape, shading and careful observation.

We thought about how toys have been around for a long time. Some of the toys we have now have not been available for very long, some weren’t around when our teachers were small, and many weren’t around when our grandparents or great grandparents were small. This got us thinking about whether toys were new or old. We sorted some photographs of toys and discussed them. 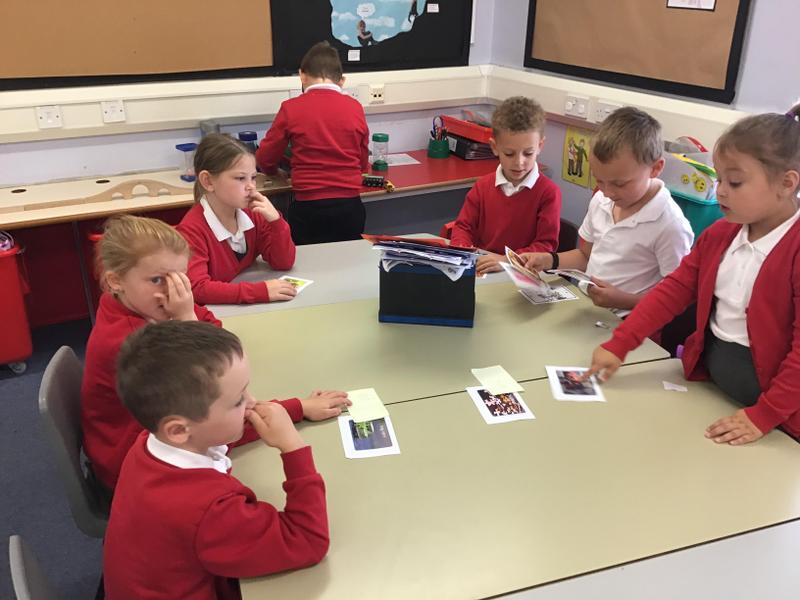 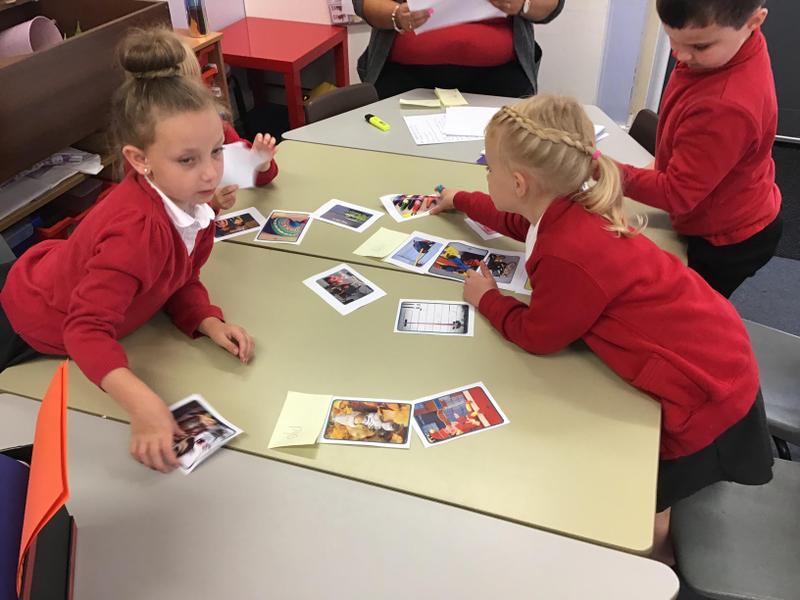 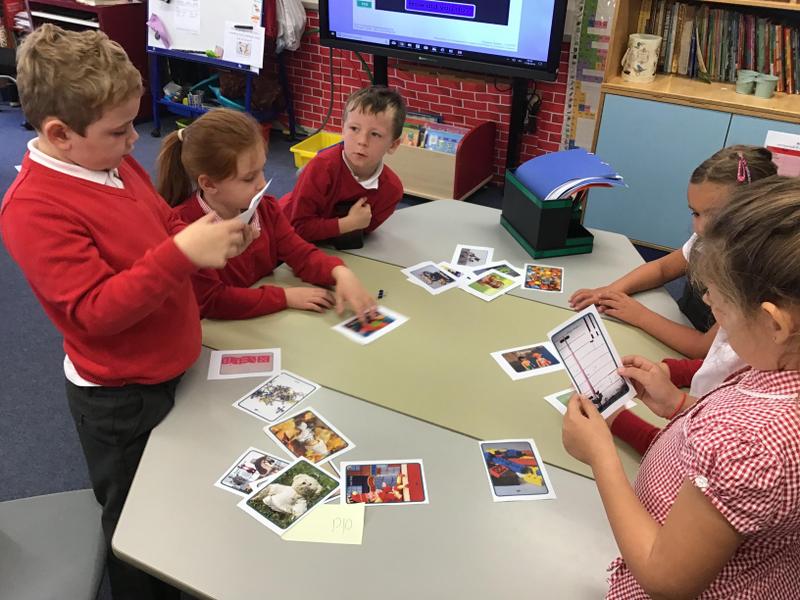 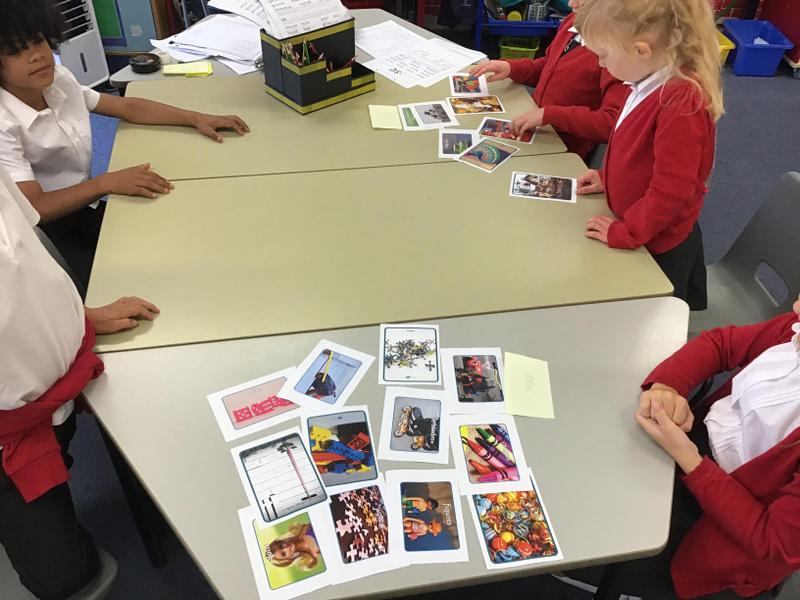 We talked a lot about how we could tell if a toy was new or old. What does ‘old’ mean in this context? Does it mean we’ve owned it for a long time? What does ‘new’ mean? Does it mean that it has only just been released? We looked at the properties and features of various toys to help us define this and decide. We also decided to use the word ‘modern’ instead of old as this made things clearer to understand. We considered the materials and technology used to make toys was an important factor in making a decision about the age of a toy.
We looked at a variety of real toys, investigating the types of materials used and the differences between older toys and more modern ones. We loved playing with some of the more old-fashioned toys! 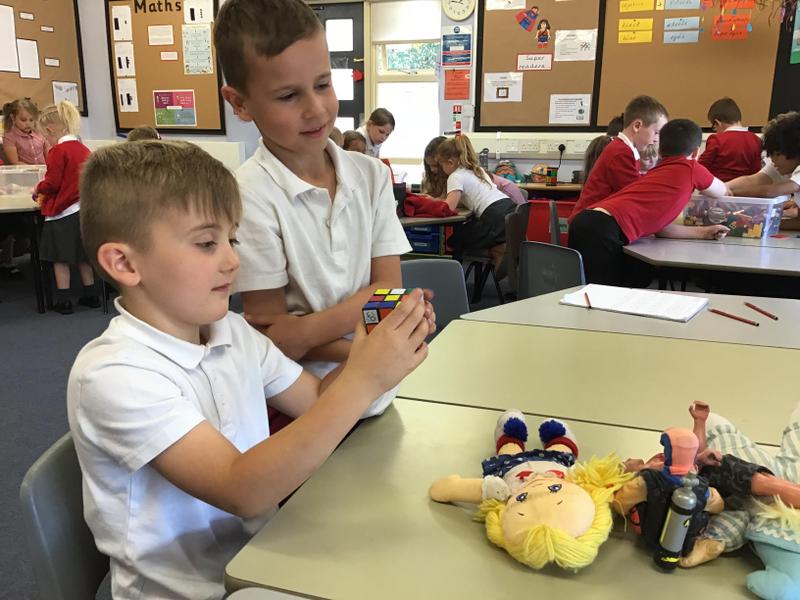 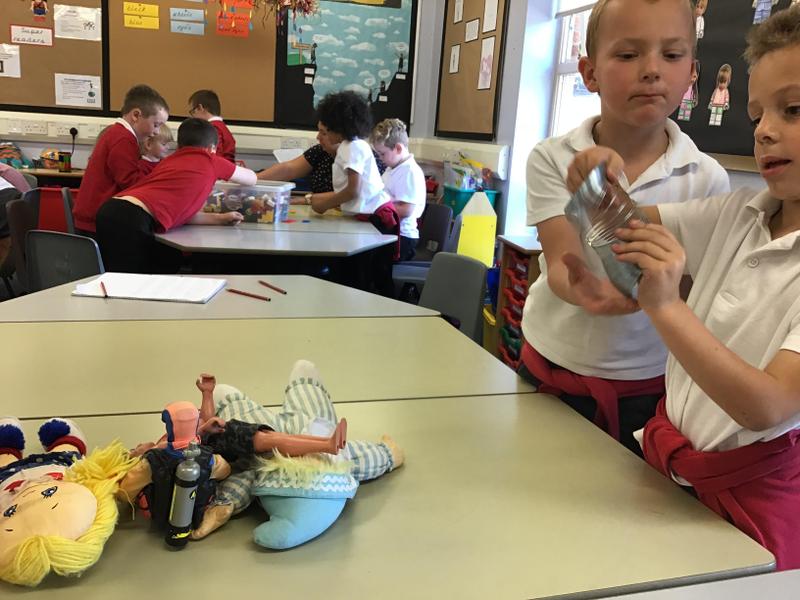 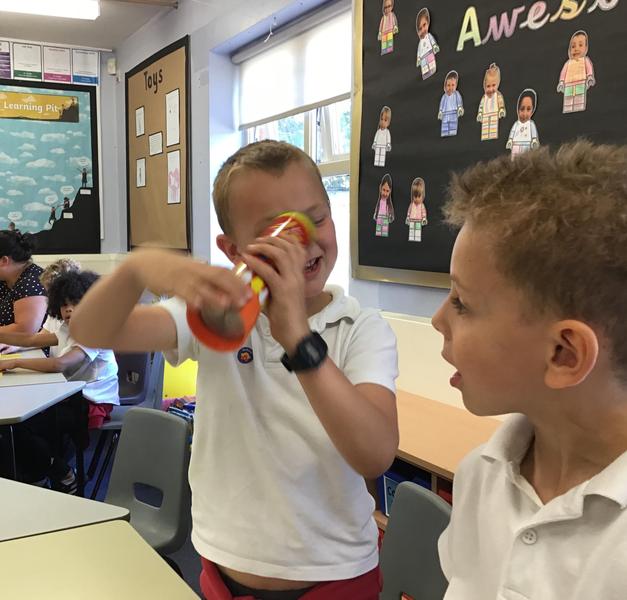 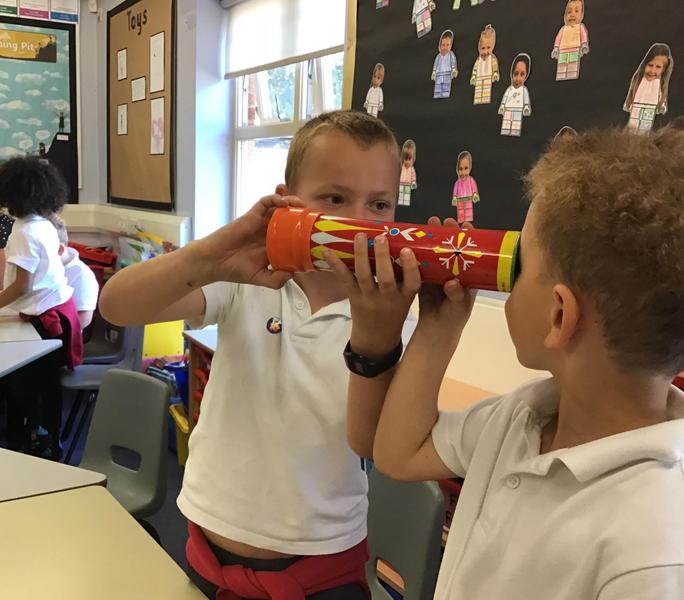 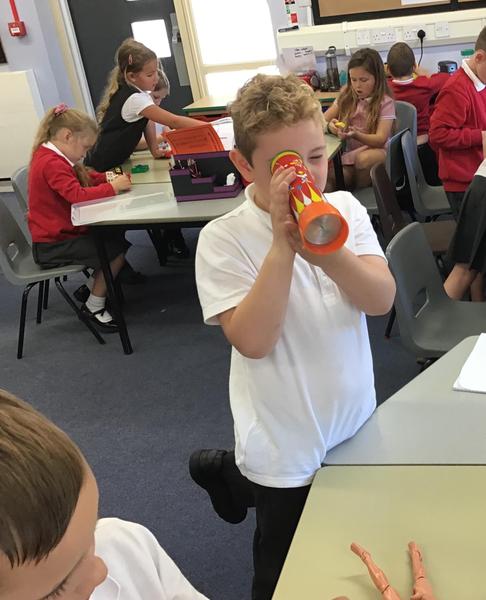 We have been reading this book this week in our topic/English lessons:
In the story, the toys come to life and play a game of hide and seek. Will the Wolf went missing...we thought he might be playing the same game so we put on our coats and went out to find him.
Just like in the story we found notes telling us if we were warmer or colder!
Whilst we were playing our game it started to rain really heavily. We were worried about Will but we had so much fun searching for him in the rain. We finally found him - he was hiding in the playhouse! At least he was nice and dry! 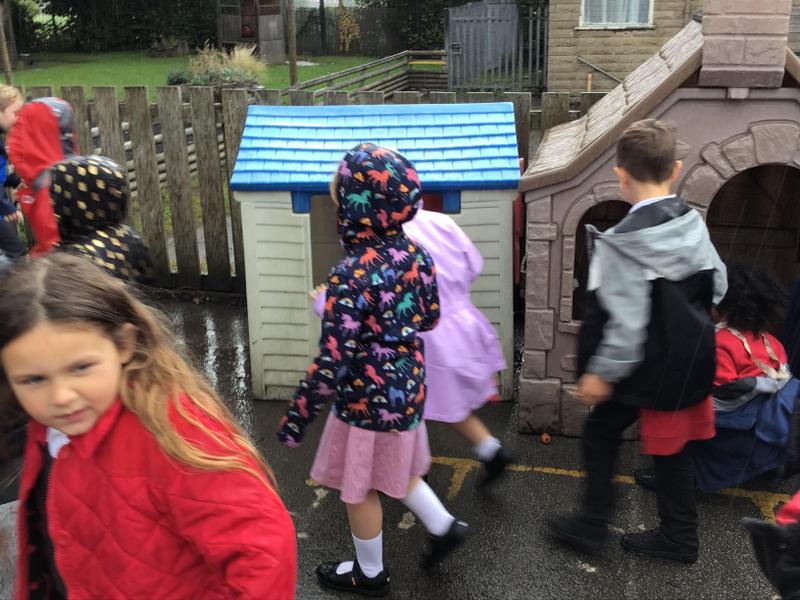 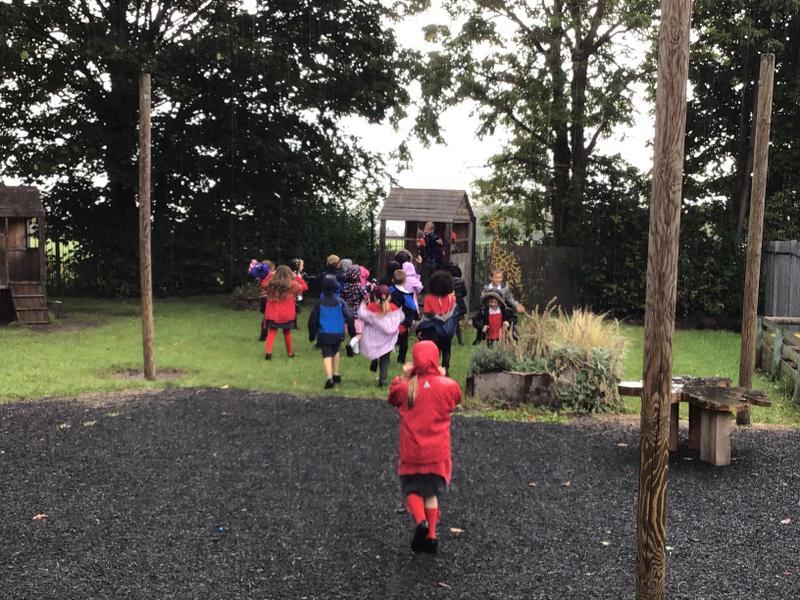 We have innovated the story and written our own version. We changed the places Bunting, the old toy cat, looks for the other toys when they are hiding. We tried to keep our writing neat and concentrated hard on making sure we wrote clear, accurate sentences which told the story. We did a fantastic job! 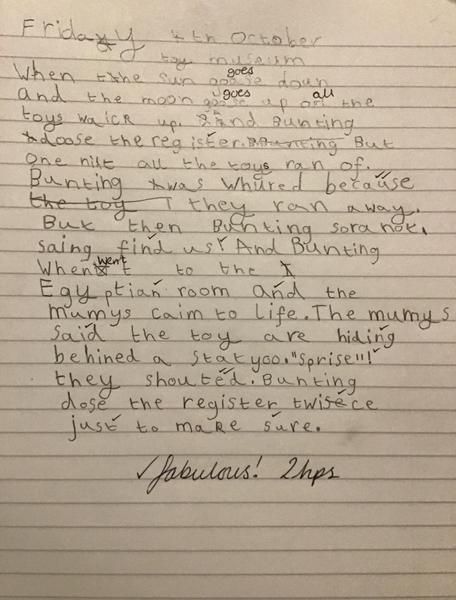 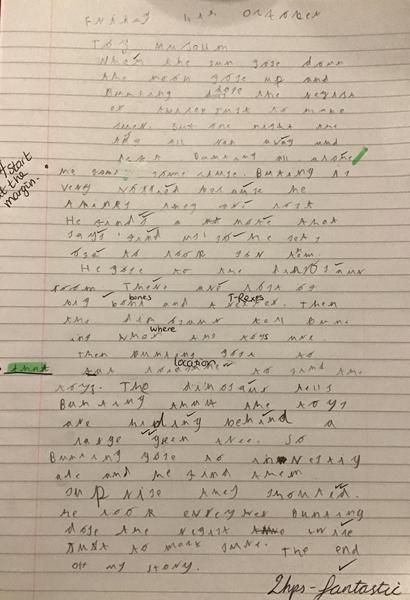 We had a visit from the Toy Workshop. We combined history and design technology to learn more about old toys and make a traditional toy. We also considered science when learning the forces which make the different toys work - we learnt about push, pull and gravity.

After a science and history-based presentation, we learnt the skills we would need to make a toy.

We used drills and hammers... 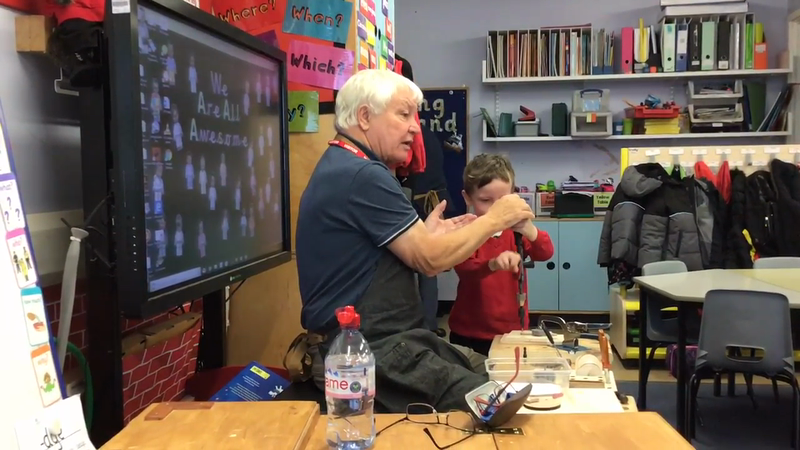 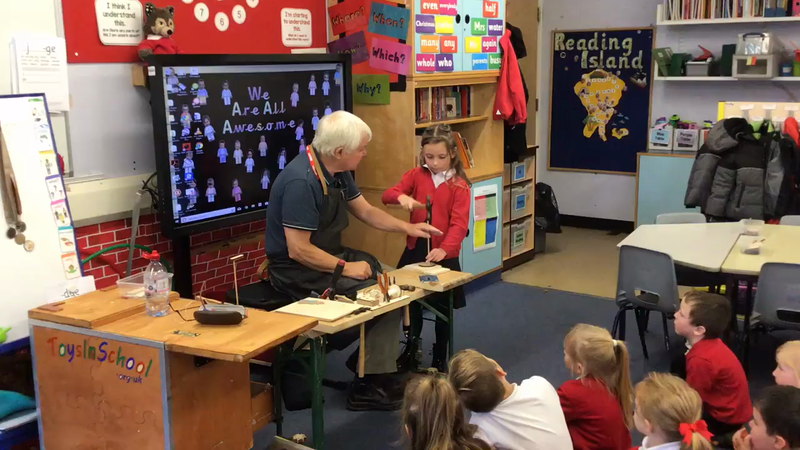 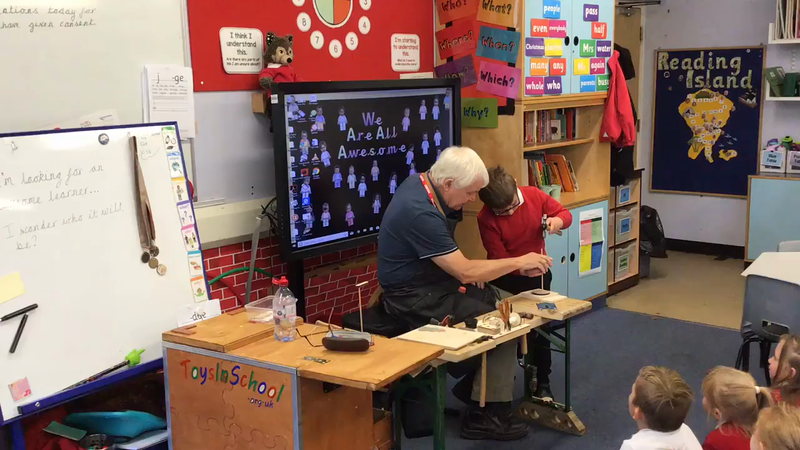 We had to design our decoration and carefully add details. We also did all the work on our own toys. We drilled, hammered and threaded. We were very careful and listened well. We all made a fab toy. We were totally awesome learners!

We then had a look at a very old toy called a stump doll. We looked at it and tried to work out what it might be and how it might have been used. We thought about the material it was made from and the properties. Then we made some predictions. We thought it might be a spinner or a hammer. It was a very early doll from around 1300’s. Children would have used rags or other cloth to make clothing for their doll.

We explored the toys in the visiting toy museum carefully and respectfully. We really enjoyed looking at the different types of toys.

We then carefully observed the zoetrope and drew it, remembering to look carefully.

We made some awesome toys!

We made an optical toy called a thaumatrope. It creates an illusion which tricks your brain. First we coloured pictures on two circles and cut them out. After that we glued them together so one picture was upside down. We made two holes in our circle and threaded string through the holes. Finally we tested them to make sure they worked. When you spin a thaumatrope the pictures merge and you see one picture made up of the combined individual pictures.  We were very impressed that we had managed to make one on our own.

We remembered that an algorithm is a set of precise instructions which can be easily followed accurately. We practised following instructions. Mrs Jones gave us some instructions to create a picture like hers. To begin with her instructions were not very good... 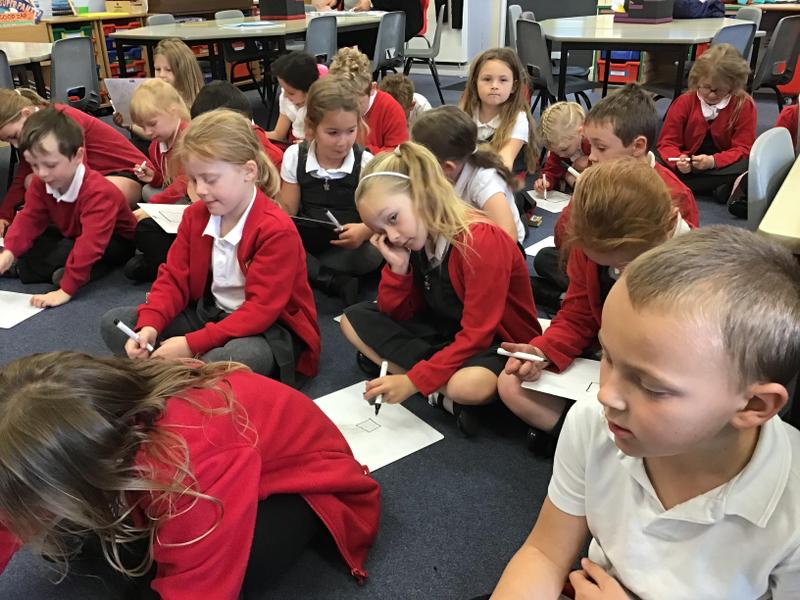 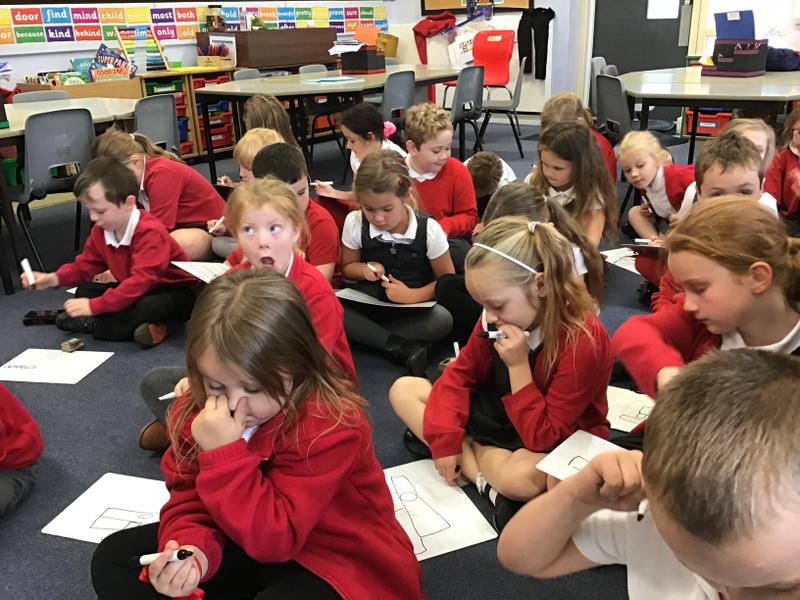 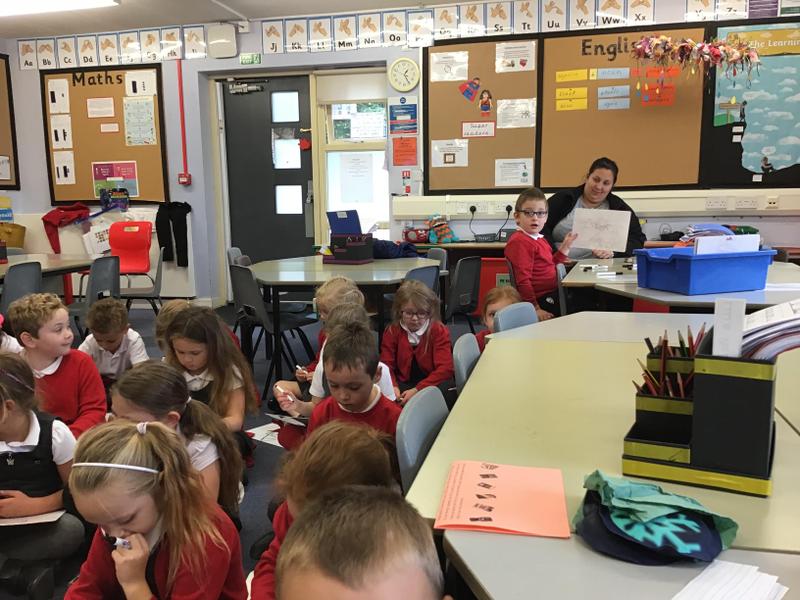 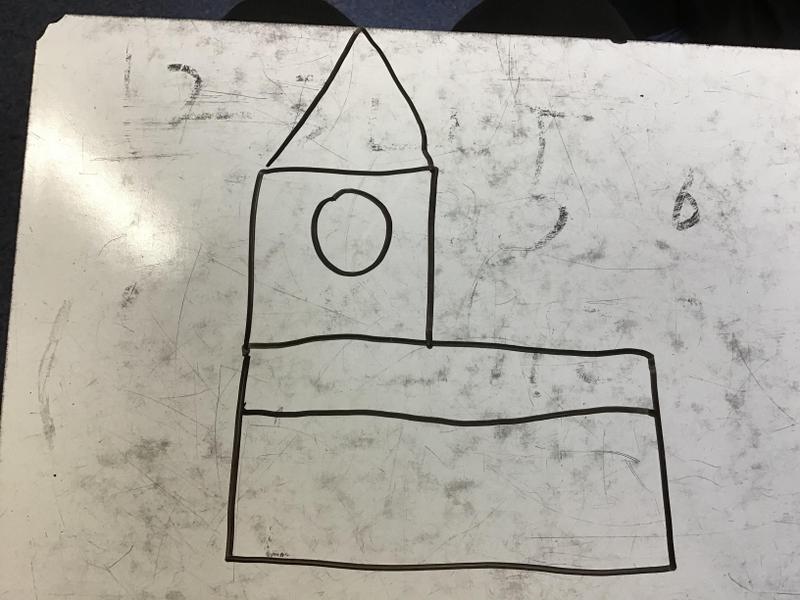 We told Mrs Jones that her instructions needed to be more like an algorithm so we could follow it successfully. She needed to tell us EXACTLY what to do... 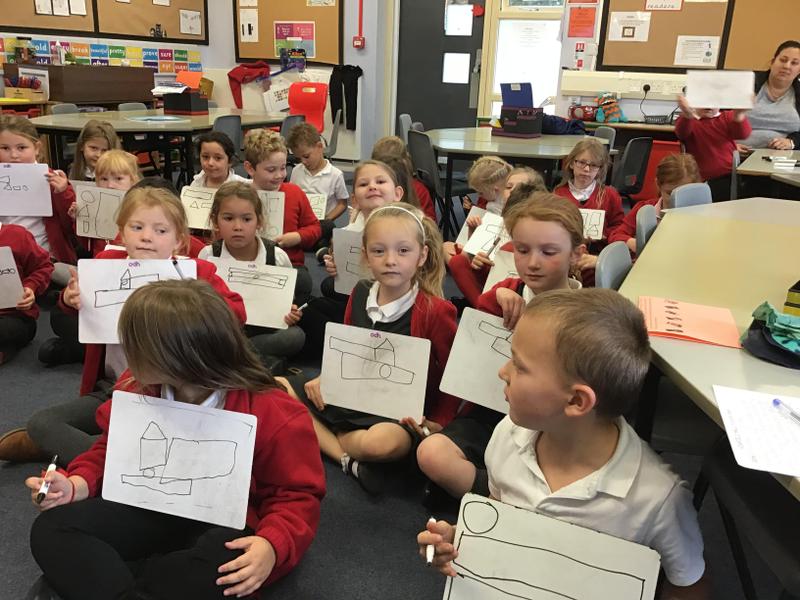 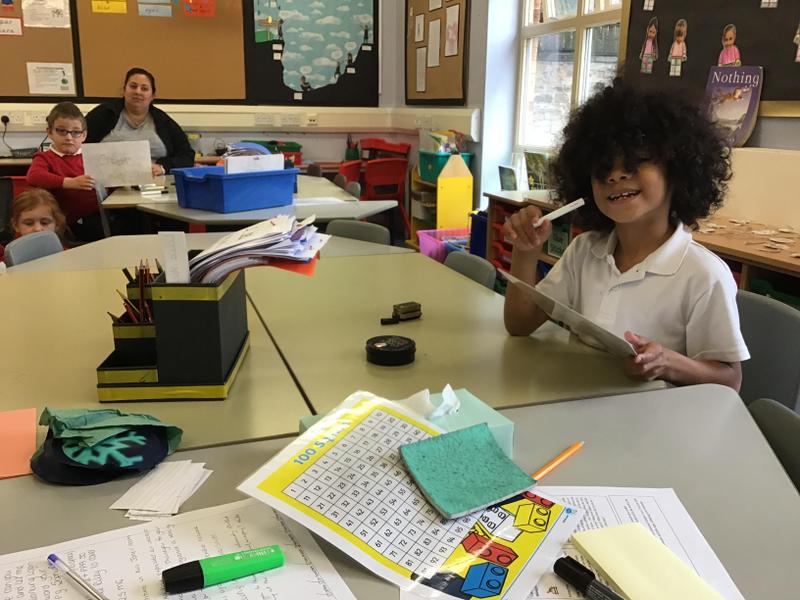 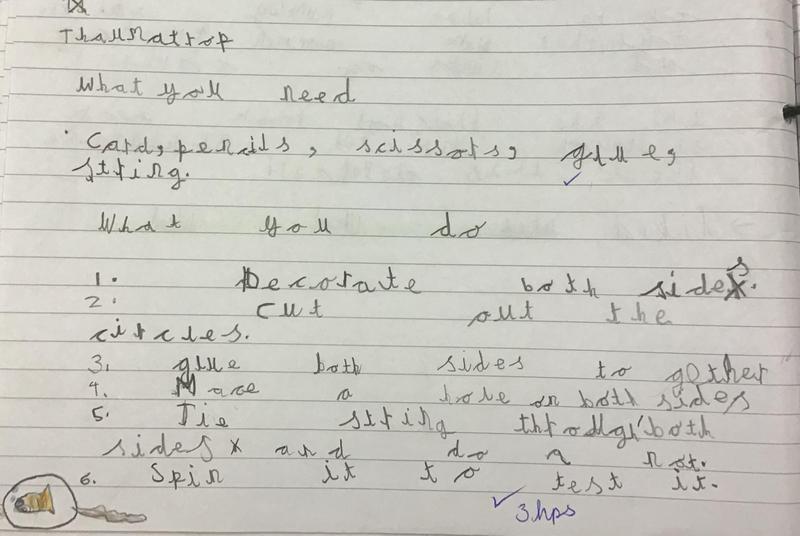 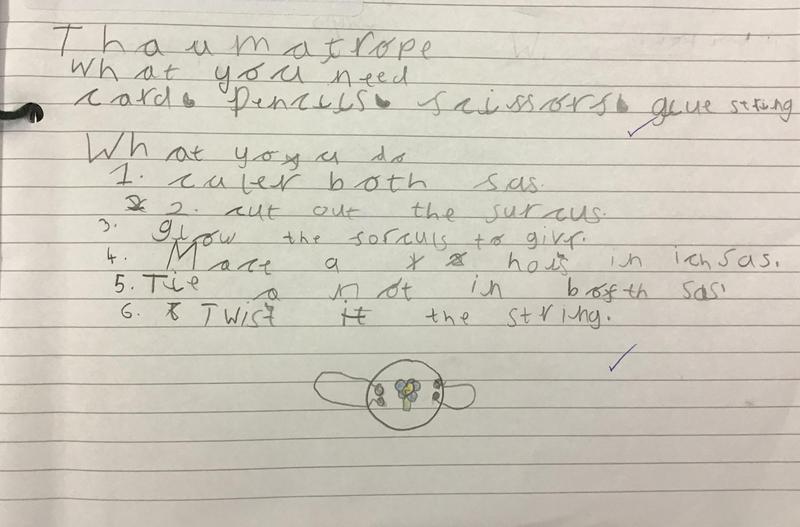 We have been thinking about toys through history. We thought about what we did to celebrate our last birthday. We worked in pairs and then groups to come up with lots of things that are commonly done to celebrate modern birthdays. We talked about differences between different families too. We got into groups and created a mind map in green which showed how modern people celebrate birthdays. 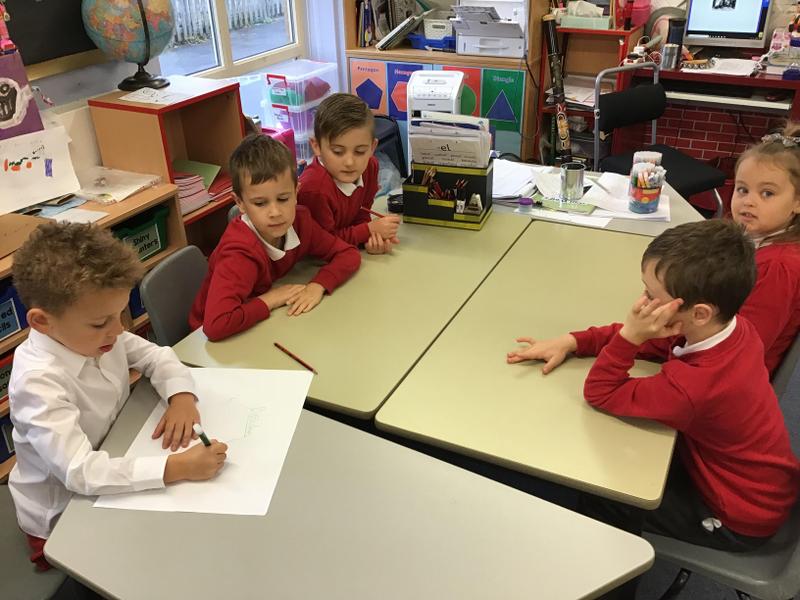 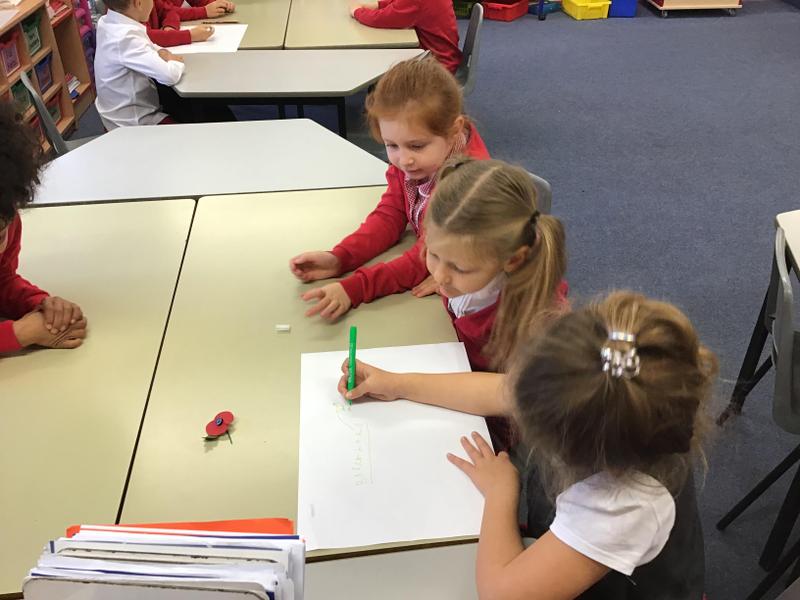 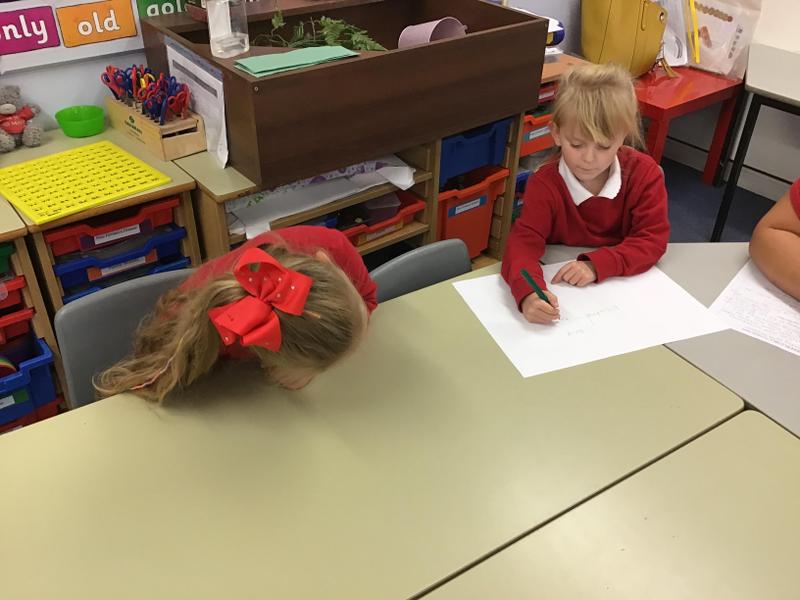 We then focussed on this one image and what his birthdays would have been like. After discussion with our group we added to our mind maps but this time in blue pen. 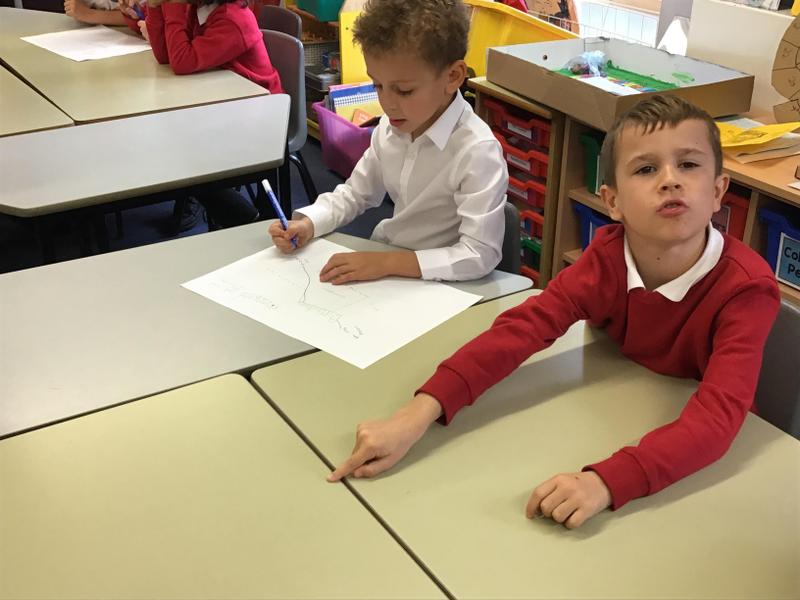 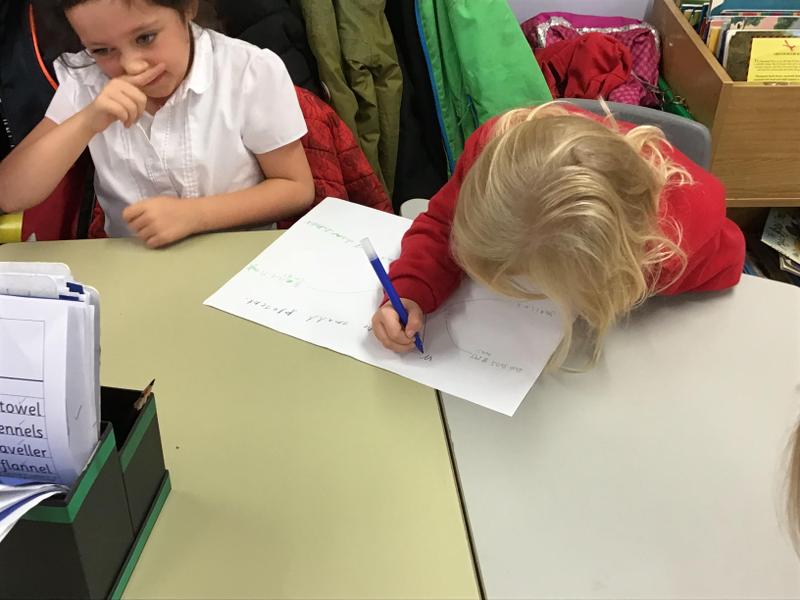 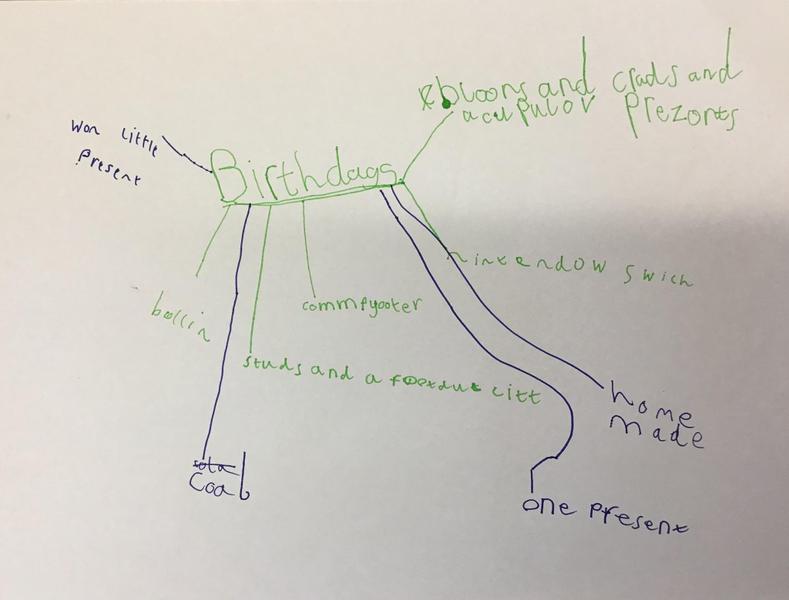 We got back together as a class and created a clsss mind map. We talked about how the boy in the picture might have felt to have only one toy. We thought that he might treasure his toy more because that one toy would then be really special. Some children said that it would be ok in Victorian times to not have toys because it didn’t mean your family didn’t love you. They also said that as long as they had lots of love from their families they would be happy because love was “the most important thing in the world!”
We did lots of very exciting homework this term. We shared our homework and played with each other’s homemade toys and games. They were absolutely awesome - Miss Firman and Mrs Jones are very impressed!